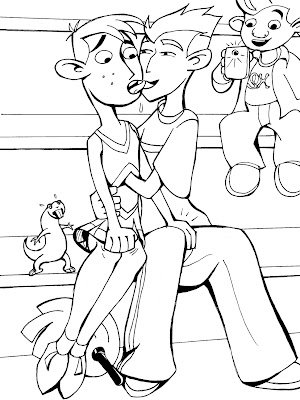 I'm a fan of Disney's "Kim Possible" cartoon series. This is a parody (fan art) of Ron and Josh from that show. Its not really the Boy Sluts... but who's to say they aren't members of the club?

I wrote a little story to go with it...

>>
Kim was right - Josh was only interested in the uniform.

He'd never even glanced at Ron until that afternoon. KP was out saving the world, and Ron had "borrowed" her cheer outfit "You know, just to get the crowd going" he'd told Rufus while he was trying to figure out which end of a skirt went in front.

As soon as Josh Mankey spied the Ronster in that cute mini skirt shaking his pon pom the was all over. Josh become a drooling animal. The Mankey became Monkey Paws, and those paws were all over Ron. Josh was already at second base and trying to steal third while the team was still on first possession.

"How DOES Kimmy keep this skirt from riding up?" Worried Ron for the fifteenth time as he pulled the hem down yet again. Ron could deal with the monkey paws - he'd been in tight situations before - but the skirt was driving him nuts.

Josh's tongue wasn't unpleasant. Ron hadn't ever had a tongue in his mouth - other than his own - and he was trying to get used to the sensation. Just as he was about to make an interior exploration of Josh's chompers, his attention snapped away. One of the monkey paws had found Ron's nipple ring and was twisting and tugging in a way that made Ron's head go slightly funny. He had to put his left hand down to steady himself.

"Waith, whath it wib tha hambs" Ron tried to say, still with his tongue in Josh's mouth, but his brain was elsewhere. His hand had landed on something hard and familiar in Josh's lap. "Is he packing heat?" Ron wondered - guns were NOT permitted at football games. His fingers reflexively gripped the shaft to see if he could wrestle the weapon away and Josh's tongue and both hands went into overdrive. Slowly Ron's brain wrapped itself around what his fingers had already wrapped around - Mankey had something in his pants... It wasn't a gun...and it was bigger than Rufus!

As awareness flooded his brain, the blood left it and headed south. With a few bobs and throbs "Ron Jr." was unfurling. The miniskirt battle was lost as Josh's free paw zoomed under and grabbed a cheek. The process was truly Unstoppable.

Just as he noticed Tim's camphone, Ron screamed "Why did I go commando today!?"

(Characters are trademarked by the Disney empire - this is a work of parody)
Posted by ScooterX at 11:27 PM