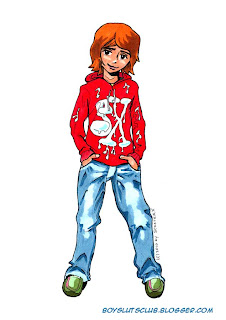 I've been practicing my Copic markers coloring technique on this drawing. (I think this is my sixth stab at it.) I'm not usually good at practicing over and over on the same thing, but this has been a very good learning experience for me. I've finally got the hair shine how I want it.

I changed the splatter on the hoodie a bit to make it read better. (whiteout and PhotoShop). I also discovered that my scanner doesn't pick up the differences between the two shades of red I used (dark and medium), so there isn't much shading on the hoodie. The scanner picks up blue really well, so there is too much shading on his jeans (they are supposed to look faded/worn, not shiny). From now on, I'll try shading reds using a complimentary (green) color.
Posted by ScooterX at 12:21 PM