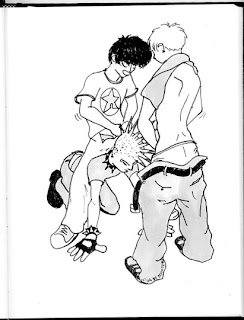 It's really tough to find a gel to keep a mohawk in place. The Boy Sluts know the best "hair product" comes from boys. Its good this punk has two friends to help him maintain his hairstyle. Punk's NOT dead.
Posted by ScooterX at 11:37 AM 2 comments: I don't remember anything about this drawing. (!) I think I was trying to draw a larger guy, instead of the waifs I usually sketch (my boyf likes husky guys). He's got a handful of condoms and what looks like his luggage, so I guess he's what the realtors call "Move in ready". Oh, and he's sporting the Boy Sluts hoody that I used to sell on Cafe Press (and maybe will again, some day).
Posted by ScooterX at 10:09 AM 3 comments: 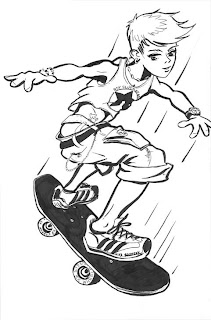 This is an early drawing of Ruben. His hair is correct, but it should be darker.
Posted by ScooterX at 9:28 AM 2 comments: 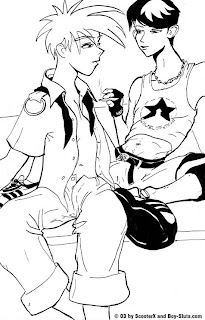 This is from 2003... It was an attempt at a slightly different drawing style for me. Ruben (dark hair) and Bobby (in front) are sharing a joint. I like Bobby's pose, and the way the clothes look. Ruben looks "wrong" to me now... his hair should be softer with more flip on the side.
Posted by ScooterX at 10:15 AM 3 comments: 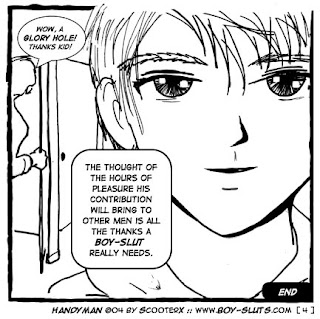 I'll be out of town for a few days, snowboarding in Yosemite. Here's a little sketch from back in 2006 to keep you warm until I get back. 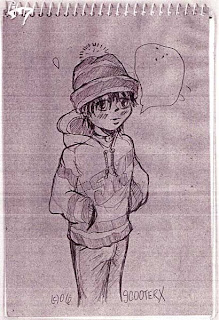 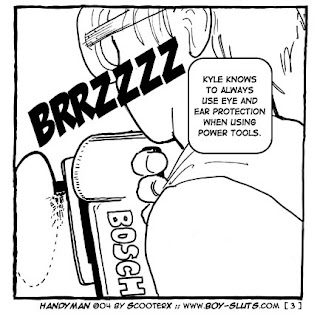 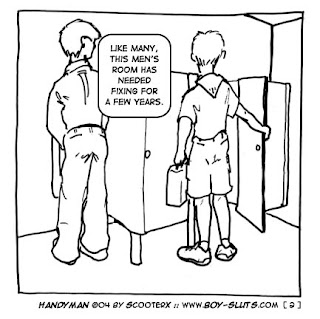 I'm starting with some really old stuff... just to get the archive up to date. This is page one of a 4-page comic. 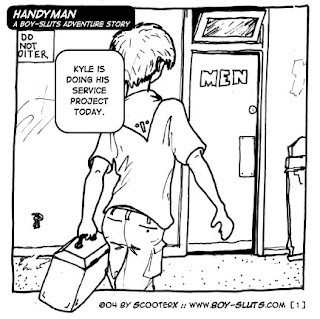 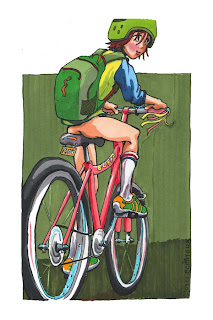 "How embarassing!" fumed Marcus as he furiously pumped the pedals of his sister's horribly pink and white bike. The day was going from bad to worse, and school hadn't even begun. He'd been up too late studying for Mrs Ash's math test and slept through his alarm clock. Then burnt his mouth on the microwaved porridge, which made him bite his lip. He almost forgot his English homework, he did forget his lunch, and ran to the bus. Marcus watched as the bus had just pulled away from the stop with half his classmates pointing and laughing at him. He ran back the three blocks to home and discovered that his bike - the nice shiny black one with the red seat that looked so cool - had a flat tire. So now he was late for school AND he was riding this horrible, horrible PINK bicycle. People were staring, cars were honking, and he had the nagging suspicion that he'd forgotten something else, something very important, but he didn't have time to figure out what it was.
Posted by ScooterX at 12:46 PM 2 comments: